Perhaps the most important yet elusive concept to grasp when learning to program PLCs is the relationship between the electrical status of the PLC’s I/O points and the status of variables and other “elements” in its programming.

This is especially true for Ladder Diagram (LD) programming, where the program itself resembles an electrical diagram.

Making the mental connection between the “real” world of the switches, contactors, and other electrical devices connected to the PLC and the “imaginary” world of the PLC’s program consisting of virtual contacts and relay “coils” is most fundamental.

A 0 bit state causes the contact to be in its “normal” (resting) condition, while a 1 bit state actuates the contact, forcing it into its non-normal (actuated) state.

Another rule to remember when examining a Ladder Diagram PLC program is that the programming software offers color highlighting ( Note 1 ) to display the virtual status of each program element: a colored contact is closed, while an un-colored contact is open.

While the presence or absence of a “slash” symbol marks the normal status of a contact, its live color highlighting shown by PLC programming software reveals the “conductive” status of the elements in real time.

Note 1 : It should be noted that in some situations the programming software will fail to color the contacts properly, especially if their status changes too quickly for the software communication link to keep up, and/or if the bit(s) change state multiple times within one scan of the program. However, for simple programs and situations, this rule holds true and is a great help to beginning programmers as they learn the relationship between real-world conditions and conditions within the PLC’s “virtual” world.

The following table shows how the two types of contacts in a PLC’s Ladder Diagram program respond to bit states, using red coloring to signify each contact’s virtual conductivity: 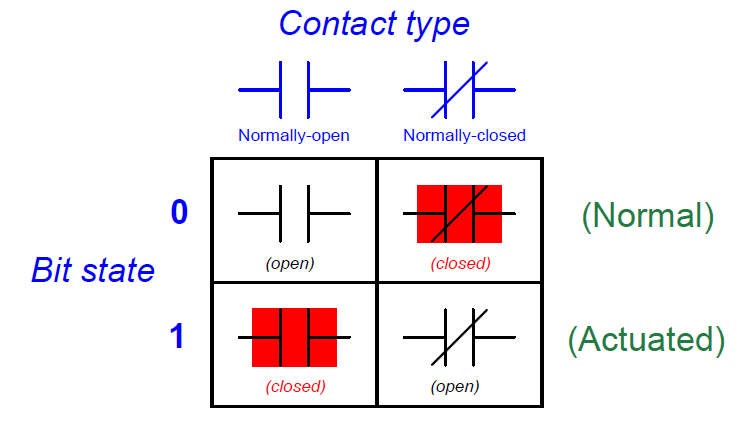 The following simplified illustration (The electrical wiring shown in this diagram is incomplete, with the “Common” terminal shown unconnected for simplicity’s sake.) shows a small PLC with two of its discrete input channels electrically energized, causing those two bits to have “1” statuses.

The color-highlighted contacts in the programming editor software’s display shows a collection of contacts addressed to those input bits in various states (colored = closed ; un-colored = open). It is the combination of bit state and contact type (NO vs. NC) that determines whether the virtual contact will be open (un-colored) or closed (colored) at any given time.

Correspondingly, it is a combination of colored highlighting and virtual contact type that indicates the real-world energization status of a particular PLC input at any given time.

The main problem of students/engineers have comprehending PLC Ladder Diagram programs is that they over-simplify and try to directly associate real-world switches connected to the PLC with their respective contact instructions inside the PLC program.

Students/Engineers mistakenly think the real-world switch connecting to the PLC and the respective virtual switch contact inside the PLC program are one and the same, when this is not the case at all.

Rather, the real-world switch sends power to the PLC input, which in turn controls the state of the virtual contact(s) programmed into the PLC.

Specifically, I see students/engineers routinely fall into the following mis-conceptions:

To clarify, here are the fundamental rules one should keep in mind when interpreting contact instructions in Ladder Diagram PLC programs:

In trying to understand PLC Ladder Diagram programs, the importance of these rules cannot be overemphasized.

The truth of the matter is a causal chain – rather than a direct equivalence – between the real-world switch and the contact instruction status.

Virtual contacts inside the PLC program are thus controlled by their corresponding real-world switches, rather than simply being identical to their real-world counterparts as novices tend to assume.

The color highlighting of coil instructions in a Ladder Diagram PLC program follows similar rules. A coil will be “on” (colored) when all contact instructions prior to it are closed (colored).

To further illuminate these fundamental concepts, we will examine the operation of a simple PLC system designed to energize a warning lamp in the event that a process vessel experiences a high fluid pressure.

120 volt AC “line” power (L1 and L2) provides electrical energy for the PLC to operate, as well as signal potential for the input switches and power for the warning lamp. Red indicator LEDs next to each I/O terminal visually indicate the electrical status of the I/O points, while red-shaded highlighting shows the virtual power (Note 2 ) status of the “contacts” and “coils” in the PLC’s program, displayed on the screen of a personal computer connected to the PLC through a programming cable.

With no one pressing the reset pushbutton, that switch will be in its normal status, which for a “normally-open” switch is open.

Since neither switch is conducting electricity right now, neither discrete input X1 nor X4 will be energized. This means the “virtual” contacts inside the PLC program will likewise be in their own normal states.

If the process vessel experiences a high pressure (> 270 PSI), the pressure switch will actuate, closing its normally-open contact. This will energize input X4 on the PLC, which will “close” the virtual contact X4 in the ladder program.

This sends virtual power to the virtual “coil” Y5, which in turn latches itself on through virtual contact Y5 (Note 3 ) and also energizes the real discrete output Y5 to energize the warning lamp: Note 3 : It is worth noting the legitimacy of referencing virtual contacts to output bits (e.g. contact Y5), and not just to input bits.

A “virtual contact” inside a PLC program is nothing more than an instruction to the PLC’s processor to read the status of a bit in memory. It matters not whether that bit is associated with a physical input channel, a physical output channel, or some abstract bit in the PLC’s memory.

It would, however, be wrong to associate a virtual coil with an input bit, as coil instructions write bit values to memory, and input bits are supposed to be controlled solely by the energization states of their physical input channels.

If now the process pressure falls below 270 PSI, the pressure switch will return to its normal state (open), thus de-energizing discrete input X4 on the PLC.

Because of the latching contact Y5 in the PLC’s program, however, output Y5 remains on to keep the warning lamp in its energized state: Thus, the Y5 contact performs a seal-in function to keep the Y5 bit set (1) even after the high pressure condition clears.

This is precisely the same concept as the “seal-in” auxiliary contact on a hard-wired motor starter circuit, where the electro-mechanical contactor keeps itself energized after the “Start” pushbutton switch has been released.

The only way for a human operator to re-set the warning lamp is to press the pushbutton. I have found when teaching electricians and other trades by default, it is best not to refer to NC & NO as normally closed & normally open.
But much better to refer to them as ;
” looking for Lo & looking for Hi ”

it saves a lot of confusion and is technically more accurate.

X
PLC Input Output ModulesPLC TutorialsEvery programmable logic controller must have some means of receiving and interpreting signals from real-world sensors such as switches, and encoders,…
PLC Tutorials