A timer is a PLC instruction measuring the amount of time elapsed following an event.

An “on-delay” timer activates an output only when the input has been active for a minimum amount of time.

Take for instance this PLC program, designed to sound an audio alarm siren prior to starting a conveyor belt.

To start the conveyor belt motor, the operator must press and hold the “Start” push-button for 10 seconds, during which time the siren sounds, warning people to clear away from the conveyor belt that is about to start.

Only after this 10-second start delay does the motor actually start (and latch “on”): Similar to an “up” counter, the on-delay timer’s elapsed time (ET) value increments once per second until the preset time (PT) is reached, at which time its output (Q) activates.

In this program, the preset time value is 10 seconds, which means the Q output will not activate until the “Start” switch has been depressed for 10 seconds.

The alarm siren output, which is not activated by the timer, energizes immediately when the “Start” push-button is pressed.

An important detail regarding this particular timer’s operation is that it be non-retentive.

This means the timer instruction should not retain its elapsed time value when the input is de-activated.

Instead, the elapsed time value should reset back to zero every time the input de-activates. This ensures the timer resets itself when the operator releases the “Start” push-button.

A retentive ondelay timer, by contrast, maintains its elapsed time value even when the input is de-activated. This makes it useful for keeping “running total” times for some event.

The IEC 61131-3 programming standard, however, addresses the issue of retentive versus non-retentive timers a bit differently.

This “freezing” of operation has the effect of retaining the current time (CT) value even if the input signal de-activates.

For example, if we wished to add a retentive timer to our conveyor control system to record total run time for the conveyor motor, we could do so using an “enabled” IEC 61131-3 timer instruction like this:

When the motor’s contactor bit (OUT contactor) is active, the timer is enabled and allowed to time.

However, when that bit de-activates (becomes “false”), the timer instruction as a whole is disabled, causing it to “freeze” and retain its current time (CT) value ( Note 1 ).

This allows the motor to be started and stopped, with the timer maintaining a tally of total motor run time.

Note 1 : The “enable out” (ENO) signal on the timer instruction serves to indicate the instruction’s status: it activates when the enable input (EN) activates and de-activates when either the enable input de-activates or the instruction generates an error condition (as determined by the PLC manufacturer’s internal programming). The ENO output signal serves no useful purpose in this particular program, but it is available if there were any need for other rungs of the program to be “aware” of the run-time timer’s status.

If we wished to give the operator the ability to manually reset the total run time value to zero, we could hard-wire an additional switch to the PLC’s discrete input card and add “reset” contacts to the program like this:

Whenever the “Reset” switch is pressed, the timer is enabled (EN) but the timing input (IN) is disabled, forcing the timer to (non-retentively) reset its current time (CT) value to zero.

An application for an off-delay timer is a cooling fan motor control for a large industrial engine.

In this system, the PLC starts an electric cooling fan as soon as the engine is detected as rotating, and keeps that fan running for two minutes following the engine’s shut-down to dissipate residual heat: 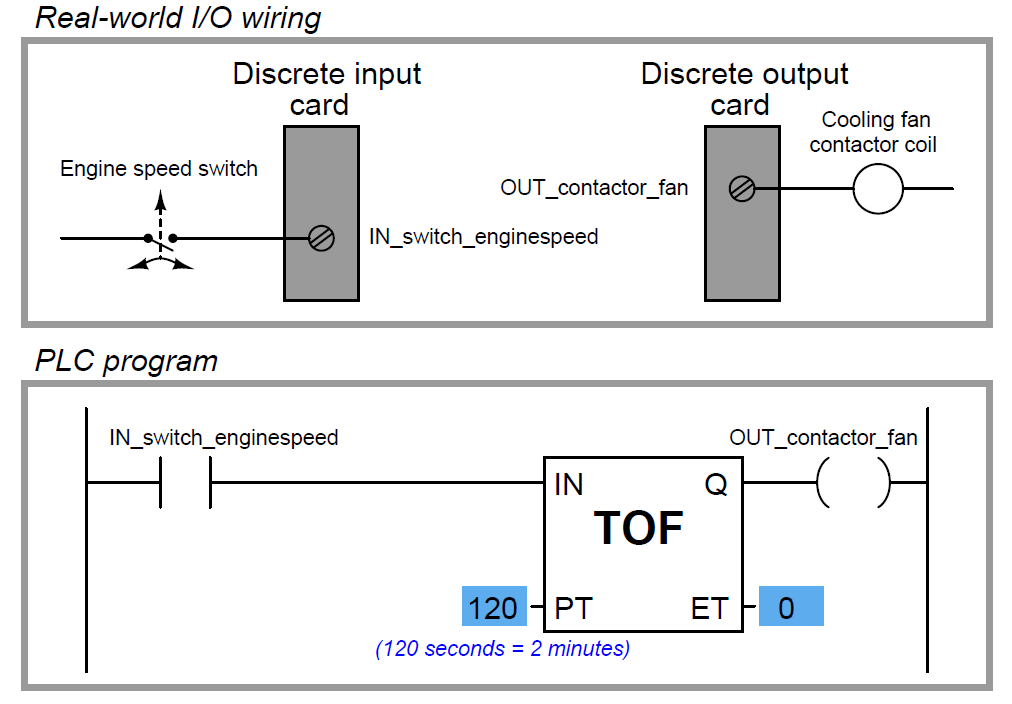 When the input (IN) to this timer instruction is activated, the output (Q) immediately activates (with no time delay at all) to turn on the cooling fan motor contactor.

This provides the engine with cooling as soon as it begins to rotate (as detected by the speed switch connected to the PLC’s discrete input).

When the engine stops rotating, the speed switch returns to its normally-open position, de-activating the timer’s input signal which starts the timing sequence.

The Q output remains active while the timer counts from 0 seconds to 120 seconds.

As soon as it reaches 120 seconds, the output de-activates (shutting off the cooling fan motor) and the elapsed time value remains at 120 seconds until the input re-activates, at which time it resets back to zero. Note 2 : The enable (EN) input signals specified in the IEC 61131-3 programming standard make retentive off-delay timers possible (by de-activating the enable input while maintaining the “IN” input in an inactive state), but bear in mind that most PLC implementations of timers do not have separate EN and IN inputs. This means (for most PLC timer instructions) the only input available to activate the timer is the “IN” input, in which case it is impossible to create a retentive off-delay timer (since such a timer’s elapsed time value would be immediately re-set to zero each time the input re-activates).