Perhaps the most common way in which the ﬂow measurement accuracy of any ﬂow meter becomes compromised is incorrect installation, and pressure-based ﬂow meters are no exception to this rule.

The following list shows some of the details one must consider in installing a pressure-based ﬂow meter element:

Elbows, tees, valves, fans, and pumps are some of the most common causes of large-scale turbulence in piping systems.

Successive pipe elbows in diﬀerent planes are some of the worst oﬀenders in this regard.

When the natural ﬂow path of a ﬂuid is disturbed by such piping arrangements, the velocity proﬁle of that ﬂuid becomes distorted; e.g. the velocity gradient from one wall boundary of the pipe to the other will not be orderly.

Large eddies in the ﬂow stream (called swirl ) will appear. This may cause problems for pressure-based ﬂow elements which rely on linear acceleration (change in velocity in one dimension) to measure ﬂuid ﬂow rate.

If the ﬂow proﬁle is distorted enough, the acceleration detected at the element may be too great or too little, and therefore not properly represent the full ﬂuid ﬂow stream.

For this reason, pressure-based ﬂow meters should always be located upstream of major disturbances such as control valves and pipe elbows where possible.

Unfortunately, both upstream and downstream ﬂow disturbances are unavoidable on all but the simplest ﬂuid systems.

This means we must devise ways to stabilize a ﬂow stream’s velocity proﬁle near the ﬂow element in order to achieve accurate measurements of ﬂow rate.

A very simple and eﬀective way to stabilize a ﬂow proﬁle is to provide adequate lengths of straight pipe ahead of (and behind) the ﬂow element.

Given enough time, even the most chaotic ﬂow stream will “settle down” to a symmetrical proﬁle all on its own.

The following illustration shows the eﬀect of a pipe elbow on a ﬂow stream, and how the velocity proﬁle returns to a normal (symmetrical) form after traveling through a suﬃcient length of straight pipe:

Recommendations for minimum upstream and downstream straight-pipe lengths vary signiﬁcantly with the nature of the turbulent disturbance, piping geometry, and ﬂow element.

Ultimately, you should consult the ﬂow element manufacturer’s documentation for a more detailed recommendation appropriate to any speciﬁc application.

In applications where suﬃcient straight-run pipe lengths are impractical, another option exists for “taming” turbulence generated by piping disturbances.

Devices called ﬂow conditioners may be installed upstream of the ﬂow element to help the ﬂow proﬁle achieve symmetry in a far shorter distance than simple straight pipe could do alone.

Flow conditioners take the form of a series of tubes or vanes installed inside the pipe, parallel to the direction of ﬂow.

These tubes or vanes force the ﬂuid molecules to travel in straighter paths, thus stabilizing the ﬂowstream prior to entering a ﬂow element:

Note : Flow elements with low beta ratio values tolerate greater disturbance in the ﬂow pattern because they accelerate the ﬂowstream to a greater degree.

This may be best visualized by a thought experiment where we imagine an oriﬁce plate with a very large beta ratio (i.e. one where the bore size is nearly as large as the pipe diameter): such an oriﬁce plate would hardly accelerate the ﬂuid at all, which would mean a mis-shapen ﬂow proﬁle entering the bore would probably remain mis-shapen exiting it.

The acceleration imparted to a ﬂowstream by a low-beta element tends to overshadow any asymmetries in the ﬂow proﬁle.

However, there are disadvantages to using low-beta elements, one of them being increased permanent pressure loss which may translate to increased operating costs due to energy loss.

This next photograph shows a very poor oriﬁce plate installation, where the straight-run pipe requirements were completely ignored: Not only is the oriﬁce plate placed much too close to an elbow, the elbow happens to be on the upstream side of the oriﬁce plate, where disturbances have the greatest eﬀect!

The saving grace of this installation is that it is not used for critical monitoring or control: it is simply a manual indication of air ﬂow rate where accuracy is not terribly important.

Nevertheless, it is sad to see how an oriﬁce meter installation could have been so easily improved with just a simple re-location of the oriﬁce plate along the piping length.

Poor installations such as this are surprisingly common, owing to the ignorance many piping designers have of ﬂowmeter design and operating principles.

Of all the criteria which must be balanced when designing a piping layout, optimum ﬂowmeter location is often placed low in the order of importance (if it appears at all!).

In applications where accuracy is important, ﬂowmeter location needs to be a very high priority even if it means a more expensive, cumbersome, and/or unattractive piping design.

Another common source of trouble for pressure-based ﬂowmeters is improper transmitter location.

Here, the type of process ﬂuid ﬂow being measured dictates how the pressure-sensing instrument should be located in relation to the pipe.

For gas and vapor ﬂows, it is important that no stray liquid droplets collect in the impulse lines leading to the transmitter, lest a vertical liquid column begin to collect in those lines and generate an error-producing pressure.

For liquid ﬂows, it is important that no gas bubbles collect in the impulse lines, or else those bubbles may displace liquid from the lines and thereby cause unequal vertical liquid columns, which would (again) generate an error-producing diﬀerential pressure.

This illustration shows both installations for a horizontal pipe: This next illustration shows both installations on a vertical pipe: 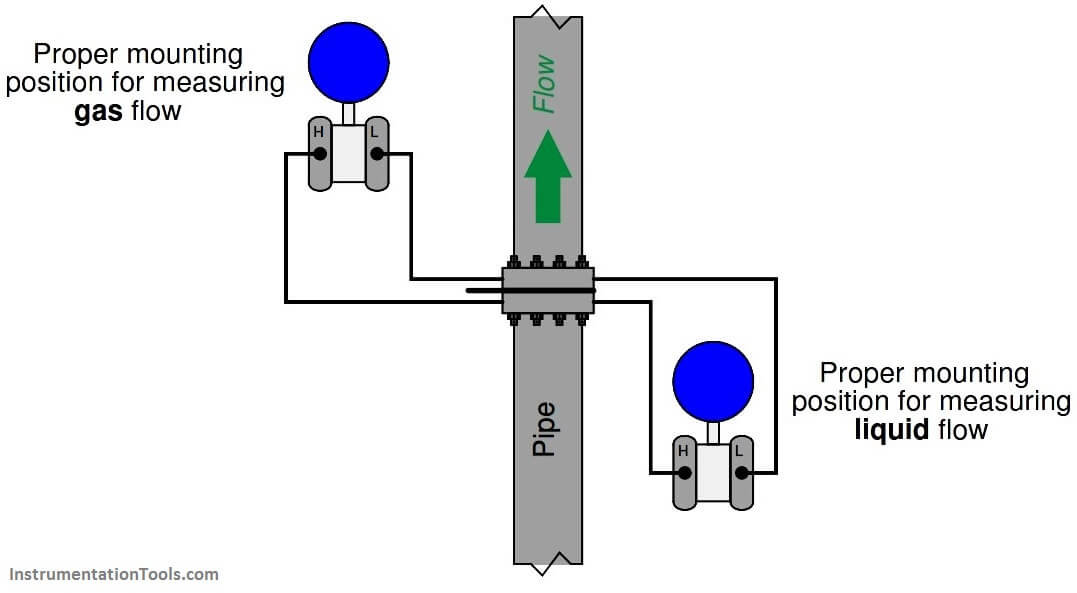 Here, condensed liquid will collect in the transmitter’s impulse lines so long as the impulse lines are cooler than the vapor ﬂowing through the pipe (which is typically the case).

In such applications it is important for the technician to pre-ﬁll both impulse lines with condensed liquid prior to placing the ﬂowmeter into service.

“Tee” ﬁttings with removable plugs or ﬁll valves are provided to do this. Failure to pre-ﬁll the impulse lines will likely result in measurement errors during initial operation, as condensed vapors will inevitably ﬁll the impulse lines at slightly diﬀerent rates and cause a diﬀerence in vertical liquid column heights within those lines.

It should be noted that some steam ﬂow element installations, however, will work well if the impulse lines are above the pipe.

If such an installation is possible, the advantage of not having to deal with pre-ﬁlling impulse lines (or waiting for steam to condense to equal levels in both lines) are signiﬁcant.

If tap holes must be drilled into the pipe (or ﬂanges) at the process site, great care must be taken to properly drill and de-burr the holes.

A pressure-sensing tap hole should be ﬂush with the inner pipe wall, with no rough edges or burrs to create turbulence.

Also, there should be no reliefs or countersinking near the hole on the inside of the pipe. Even small irregularities at the tap holes may generate surprisingly large ﬂow-measurement errors.