The purpose of a float level switch is to open or close a circuit as the level of a liquid rises or falls.  All float operated liquid level controls operate on the basic buoyancy principle which states “the buoyancy force action on an object is equal to the mass of liquid displaced by the object.” As a result, floats ride on the liquid surface partially submerged and move the same distance the liquid level moves. Because of this, they are normally used for narrow level differential applications such as high level alarm or low level alarm.

To complete a circuit, float switches utilize a magnetic reed switch, which consists of two contacts sealed in a glass tube.  When a magnet comes close to the two contacts, they become attracted to each other and touch, allowing current to pass through.  When the magnet moves away, the contacts demagnetize and separate (breaking the circuit), as shown below figure. 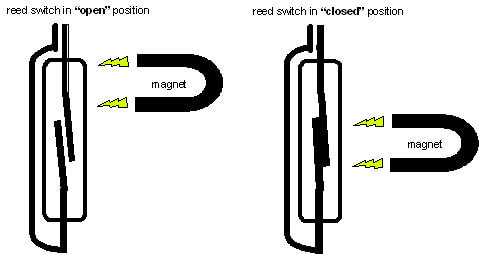 In a float switch, the magnetic reed switch is hermetically sealed in a stem, most often made from plastic or stainless steel.  The float encases a sealed magnet, which moves up and down the length of the stem as a fluid level rises and falls.  As the magnet passes by the contacts in the encased reed switch, they touch and complete a circuit between the two lead wires. The Open or Close of the Contacts indicates the High or Low Alarm.

Here in our Animation, The raise in liquid level lifts the float and this in turn moves the magnet closer to the reed switch. when magnet comes near to reed switch, the output contact changes. The change in contact is a signal of liquid level raise or vice versa.