Once the basic theory behind the operation of batteries is understood, we can apply these concepts to better understand the way batteries are utilized.

When several cells are connected in series (Figure 7), the total voltage output of the battery is equal to the sum of the individual cell voltages. In the example of the battery in Figure 7, the four 1.5V cells provide a total of 6 volts. 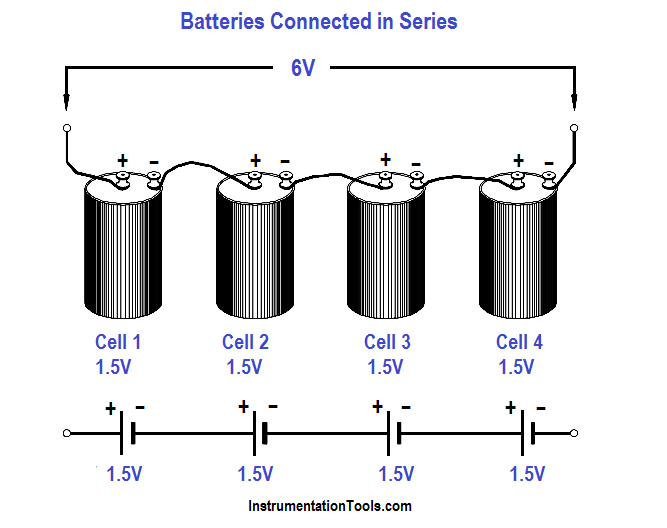 Cells connected in parallel have the same effect as increasing the size of the electrodes and electrolyte in a single cell. The advantage of connecting cells in parallel is that it will increase the current-carrying capability of the battery. Cells that cannot be returned to good condition, or recharged after their voltage output has dropped to a value that is not usable, are called primary cells. Dry cells that are used in flashlights and transistor radios (e.g., AA cells, C cells) are examples of primary cells.

Cells that can be recharged to nearly their original condition are called secondary cells. The most common example of a secondary, or rechargeable cell, is the lead-acid automobile battery.

Internal resistance in a chemical cell is due mainly to the resistance of the electrolyte between electrodes (Figure 9).

With no current flow, the voltage drop is zero; thus, the full battery voltage is developed across the output terminals (VB).  If a load is placed on the battery, load resistance (RL) is in series with internal resistance (Ri). 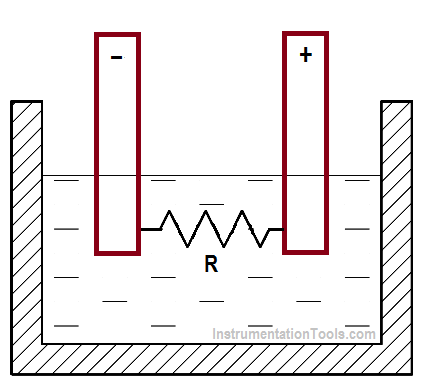 When current flows in the circuit (IL ), the internal voltage drop (ILRi) drops the terminal voltage of the battery as shown in below Equation. Thus, internal resistance reduces both the current and voltage available to the load.

The shelf life of a battery is the time which a battery may be stored and not lose more than 10 percent of its original capacity.

The charge of a battery may refer to as one of two things:

Discharge, simply stated, is the act of drawing current from a battery.