Both of these manual methods make use of a graduated measurement tape, ruler or dipstick, to read the level and/or interface.

This measurement is typically used on large tanks. A ruler or dipstick is typically used for relative small tanks. A practical limit is 2 to 3 metres height max. In some area’s/countries also so called ‘slip tube’ gauges are used for on LPG rail tankers.

NFPA 58 describes slip tube gauge as a “A variable liquid level gauge in which a relatively small positive shutoff valve is located at the outside end of a straight tube, normally installed vertically, that communicates with the container interior.” A slip tube is basically a ‘dip stick’. On clear liquids and very light products which easily evaporate, including water, often a coloring paste is used. The paste changes color when in direct contact with the liquid.

For water detection which is often called ‘water‐finding’ rule to detect a level is recommended. Water finding rules are typically made of brass with alternating transparent plastic sections, which allows seeing where the paste has discolored when measuring water in opaque oils

For closed tanks, and products which are toxic, easily evaporate or are flammable, often a sight glass is used.

The sight glass is typically installed as part of a ‘chamber/cage’. It can either be a transparent piece of piping or a metal enclosure with typically a hardened flat glass view pane. 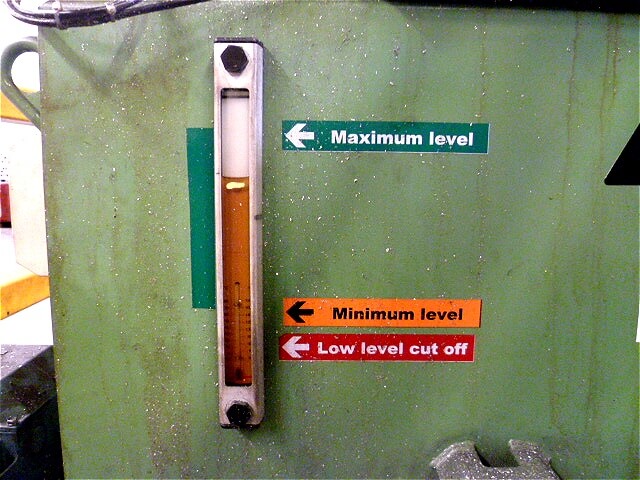 Reflex gauges are a special form of sight glass gauges, and use optical refraction and reflection for an improved visibility of interfaces in and between vapour/gas and liquid zones. Is some specific areas and equipment (steam generators, boilers, power generation), the use of sight glass type level gauges may also be mandatory to fulfill the design code (e.g. ASME I).

Sight glass may also be useful where direct vision of the fluid is relevant. Representative measurements of the temperature of the tank contents may also be measured with the portable electronic gauging. This temperature measurement permits to convert the observed volume to a standard volume measurement.

Tape, ruler or dipstick can only be used when the tank is not pressurized and the tank contents are considered to be safe (i.e. not toxic, dangerous and do not pose an environmental issue). Sight glasses cannot be used for tanks containing sediment or solids, as the connection might become blocked.

Use of sight glasses can be considered for interface measurement also, provided the interface layer is clearly visible.

Sight glass installation is also possible on pressurized tanks but sometimes perceived as a safety risk.

On tanks which also contain solids, the reading of the sight glass can be unreliable as result of blockage. For these applications strict procedures for periodic flushing the sight glass and connections should be considered.

Sight glasses require regular maintenance and cleaning. The presence of some hydrocarbon liquids can cause staining and this can make it difficult to ascertain where the true level actually is placed.

Safety and environmental regulations may restrict tank gauging operations which can result in the release of hydrocarbons or other volatile organic compounds into the atmosphere. In these circumstances, it will not normally be feasible to use traditional open gauging procedures via an open gauge hatch or gauging access point. For all toxic, pressurized and dangerous products, ‘closed’ solutions are preferred.

If manual methods are to be used, the safe use should be covered by procedures and formal training.

For applications where the accuracy is of importance, the graduated scale on tape, dip stick or sight glass can be calibrated.

It is important to realize that it is always critical to use the correct datum point on the particular tank. This datum point can be a ‘dip’ plate on the bottom or a clear marked mechanical provision on or in the tank nozzle.

Sight glasses can be adjusted by shifting the graduated scale.

The portable electronic gauging sensor is calibrated once at the factory and does not require subsequent calibration.