Humidity measurement is an important tool for predicting the climate outdoors as well as controlling the climate indoors. Humidity control is especially important in living, storage, and manufacturing sites.

Relative Humidity is temperature dependent. At 100% RH, the actual pressure of the water vapor is equal to the saturation pressure. The temperature where this exists is called the dew point. Any cooling below the dew point causes water to condense. If the atmosphere stabilizes at a constant humidity during the day, the falling temperatures at night may go below the dew point causing the vapor to condense. The condensing vapor creates the phenomenon commonly known as dew. A crucial fact to note is that it is only necessary for the sensor to obtain one measurement, absolute humidity, RH, or dew point, because the other two can be calculated using the ambient temperature, graphs or equations.

In general, obtaining a measure of humidity is not an easy task. Many of the instruments have poor accuracy, narrow bandwidth, contamination problems, and hysteresis. Some of the instruments are large, awkward, and expensive pieces of equipment. To compound the problem there are few highly accurate devices for humidity generation and measurement, needed for use in sensor calibration. Discussed below, are the different methods of humidity sensing.

The oldest method for measuring relative humidity is the psychrometric method. Psychrometry is commonly known as the “wet” and “dry” bulb method. A psychrometric sensor does not directly sense humidity, but rather it senses temperature to indirectly find relative humidity. The sensing elements can be thermometers, RTD’s, or thermistors. The first sensing element, the dry bulb, measures ambient temperature. The second sensing element, the wet bulb, is enclosed in a wick saturated with distilled water. Air forced across the wet bulb creates evaporation, which cools it below ambient temperature. The amount of evaporation (cooling) is dependent on the vapor pressure of the air. Using the wet and dry bulb temperatures, the relative humidity can be looked up on a psychrometric chart. Looking up the %RH on a chart for every measurement is time-consuming and cumbersome. With today’s technology, psychrometric charts and dew point equations can be stored in a microprocessor, thus making this a direct sensing method for RH and dew point. The sling psychrometer dates back to the late 19th century. It used mercury thermometers for temperature measurement, and swinging the bulb around created air movement across the wet bulb. Nowadays, the units have built in fans to ventilate the wet bulb. A psychrometric sensor has good precision with %RH resolutions of 0.1%, humidity ranges from 10 – 100% at temperatures from 32oF to 140oF, and accuracy’s of + 2%. The drawbacks of a psychrometric sensor are a slow response time and they are substantially more expensive.

Another method for measuring humidity is using a dew point sensor. There are two common types of dew point sensors, the cooled condensation surface type, or a solution of saturated lithium chloride. The solution of saturated lithium chloride does not directly sense relative humidity. Saturating a wick with resistive electrodes in the solution and an excitation current through the wick creates joule heating. The heating causes some of the solution to evaporate, which reduces the resistance and slows heating. Eventually equilibrium is reached and the temperature of the solution can then be related to the dew point.

The hygrometric method of relative humidity sensing is the most common. The instruments are generally compact, reliable, and inexpensive. Hygrometric humidity sensors provide an output that is directly indicative of humidity. The first humidity sensing elements were mechanical in nature. Physical dimensions of various materials will change with the adsorption1 of water. Some examples of these are hair, animal membrane, and some plastics. To build a sensor from these materials the element is kept in tension with a spring. A strain gage monitors the displacement caused by a change in the moisture content of the air. The output of the strain gage is directly proportional to the relative humidity. A second method of hygrometry is coating an oscillating crystal (quartz) with a hygroscopic coating. When the coating adsorbs water the mass changes which then changes the crystal’s oscillating frequency. A more obscure method is an electrolytic hygrometer. This method is complicated and not used frequently enough to warrant explanation.

Recent strides in thin film and micromachining technology make it possible to produce high quality resistive and capacitive hygrometric sensors. These sensors have become more accurate, compact, and stable in recent years making them popular in industry. The materials used to produce these sensing elements have the ability to change their electrical characteristics with the adsorption of water. The materials have changed over the years from electrolytic salts, to ceramics, to the recently popular polymers. The new designs in sensing material have overcome many problems. The first major problem with the sensors was narrow bandwidths. Each individual sensor was only reliable over a span of 10 to 20% relative humidity. Numerous manufactured sensors with specific spans cover the entire %RH span. Then there was a problem when adsorbed water left impurities behind on the surface. These impurities would change the electrical characteristics of the sensing materials. The polymers used now have overcome these early problems.

A capacitive sensor is built like a parallel-plate capacitor. The sensing element serves as the dielectric. As the moisture in the air changes the water vapor, the sensing polymer changes with adsorption, resulting in a dielectric constant change. The dielectric constant is directly proportional to the capacitance, which is inversely proportional to the %RH. New techniques in producing thin films have made these, accurate, stable, and easy to manufacture large quantities. 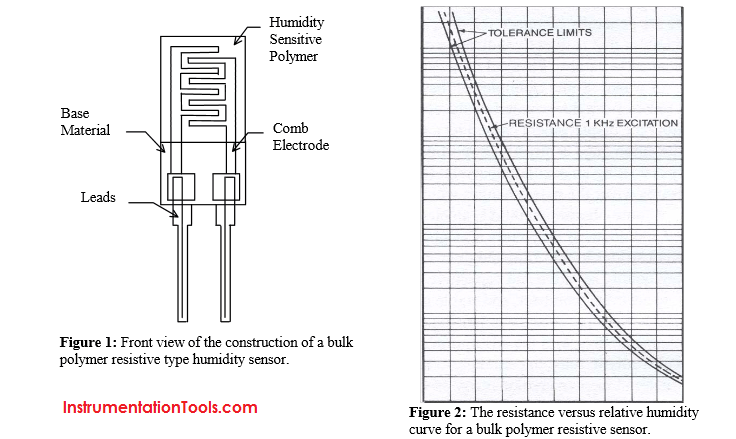 The resistive types of hygrometers are the sensors ACI uses in their products. The sensors consist of placing a thin film of sensing polymer over a set of comb electrodes. Figure 1 is a representation of the physical parts of the humidity sensor. The sensor adsorbs water into the humidity sensing material, which changes the polymers resistance. Other materials adsorb the water, which changes just the surface resistivity. Because the water is absorbed the bulk resistance of the polymer changes making the sensor resistant to surface contamination. The sensor requires an AC excitation current. So there is no chance electrolysis or separation of the humidity-sensing polymer can occur. Thin film technology makes these sensors accurate, stable, and easy to manufacture. The choice of material assures they have fast response times with little hysteresis. Another attraction is their small size and low cost.