The efficient identification and correction of instrument calibration errors is an important function for instrument technicians. For some technicians – particularly those working in industries where calibration accuracy is mandated by law – the task of routine calibration consumes most of their working time.

The slope-intercept form of a linear equation describes the response of any linear instrument:

A zero shift calibration error shifts the function vertically on the graph, which is equivalent to altering the value of b in the slope-intercept equation. This error affects all calibration points equally, creating the same percentage of error across the entire range.

Using the same example of a pressure transmitter with 0 to 100 PSI input range and 4 to 20 mA output range: If a transmitter suffers from a zero calibration error, that error may be corrected by carefully moving the “zero” adjustment until the response is ideal, essentially altering the value of b in the linear equation.

A span shift calibration error shifts the slope of the function, which is equivalent to altering the value of m in the slope-intercept equation. This error’s effect is unequal at different points throughout the range: 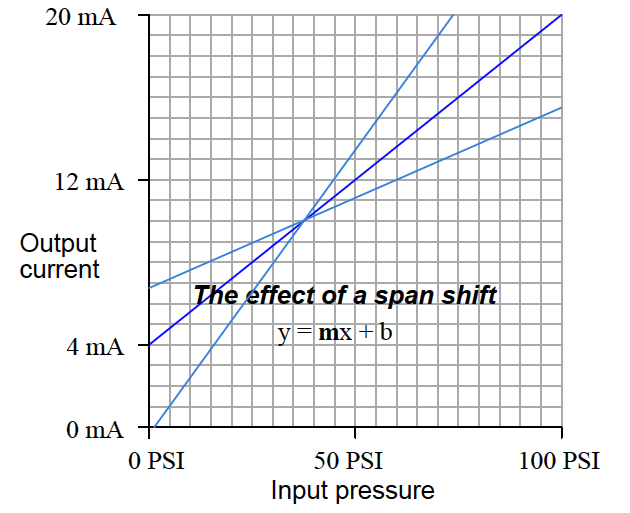 If a transmitter suffers from a span calibration error, that error may be corrected by carefully moving the “span” adjustment until the response is ideal, essentially altering the value of m in the linear equation.

A linearity calibration error causes the instrument’s response function to no longer be a straight line. This type of error does not directly relate to a shift in either zero (b) or span (m) because the slope-intercept equation only describes straight lines: Some instruments provide means to adjust the linearity of their response, in which case this adjustment needs to be carefully altered.

If an instrument does not provide a linearity adjustment, the best you can do for this type of problem is “split the error” between high and low extremes, so the maximum absolute error at any point in the range is minimized. Hysteresis errors are almost always caused by mechanical friction on some moving element (and/or a loose coupling between mechanical elements) such as bourdon tubes, bellows, diaphragms, pivots, levers, or gear sets.

Friction always acts in a direction opposite to that of relative motion, which is why the output of an instrument with hysteresis problems always lags behind the changing input, causing the instrument to register falsely low on a rising stimulus and falsely high on a falling stimulus.

Flexible metal strips called flexures – which are designed to serve as frictionless pivot points in mechanical instruments – may also cause hysteresis errors if cracked or bent.

Thus, hysteresis errors cannot be rectified by simply making calibration adjustments to the instrument – one must usually replace defective components or correct coupling problems within the instrument mechanism.

In practice, most calibration errors are some combination of zero, span, linearity, and hysteresis problems. An important point to remember is that with rare exceptions, zero errors always accompany other types of errors.

In other words, it is extremely rare to find an instrument with a span, linearity, or hysteresis error that does not also exhibit a zero error. Most DP instrument ranges encompass 0 PSI, making this a very simple single-point check. If the technician “blocks and equalizes” a DP instrument and it properly reads zero, its calibration is probably good across the entire range. If the DP instrument fails to read zero during this test, it definitely needs to be recalibrated.