Coriolis ﬂow meters represent the state-of-the-art in mass ﬂow measurement. While incredibly versatile and accurate, their internal operation can be diﬃcult to understand.

Put into very simple terms, a Coriolis ﬂow meter works by shaking one or more tubes carrying the ﬂowing ﬂuid, then precisely measuring the frequency and phase of that shaking.

The back-and-forth shaking is driven by an electromagnetic coil, powered by an electronic ampliﬁer circuit to shake the tube(s) at their mechanical resonant frequency.

As ﬂuid begins to move through the tubes, the inertia of the moving ﬂuid adds another dimension to the tubes’ motion: the tubes begin to undulate (Note 2) , twisting slightly instead of just shaking back and forth.

Note 1: In fact, this density-measuring function of Coriolis ﬂow meters is so precise that they often ﬁnd use primarily as density meters, and only secondarily as ﬂow meters!

Note 2 : An interesting experiment to perform consists of holding a water hose in a U-shape and gently swinging the hose back and forth like a pendulum, then ﬂowing water through that same hose while you continue to swing it. The hose will begin to undulate, its twisting motion becoming visually apparent.

In physics, certain types of forces are classiﬁed as ﬁctitious or pseudo forces because they only appear to exist when viewed from an accelerating perspective (called a non-inertial reference frame).

The feeling you get in your stomach when you accelerate either up or down in an elevator, or when riding a roller-coaster at an amusement park, feels like a force acting against your body when it is really nothing more than the reaction of your body’s inertia to being accelerated by the vehicle you are in.

The real force is the force of the vehicle against your body, causing it to accelerate. What you perceive is merely a reaction to that force, and not the primary cause of your discomfort as it might appear to be.

Centrifugal force is another example of a “pseudo force” because although it may appear to be a real force acting on any rotating object, it is in fact nothing more than an inertial reaction.

Centrifugal force is a common experience to any child who has ever played on a “merry-go-round:” that perception of a force drawing you away from the center of rotation, toward the rim.

The real force acting on any rotating object is toward the center of rotation (a centripetal force) which is necessary to make the object radially accelerate toward a center point rather than travel in a straight line as it normally would without any forces acting upon it. When viewed from the perspective of the spinning object, however, it would seem there is a force drawing the object away from the center (a centrifugal force).

Yet another example of a “pseudo force” is the Coriolis force, more complicated than centrifugal force, arising from motion perpendicular to the axis of rotation in a non-inertial reference frame.

The example of a merry-go-round works to illustrate Coriolis force as well: imagine sitting at the center of a spinning merry-go-round, holding a ball. If you gently toss the ball away from you and watch the trajectory of the ball, you will notice it curve rather than travel away in a straight line.

In reality, the ball is traveling in a straight line (as viewed from an observer standing on the ground), but from your perspective on the merry-go-round, it appears to be deﬂected by an invisible force which we call the Coriolis force.

In order to generate a Coriolis force, we must have a mass moving at a velocity perpendicular to an axis of rotation: The magnitude of this force is predicted by the following vector equation :

To phrase this in anthropomorphic terms, the ﬂuid “ﬁghts” against this rotation because it “wants” to keep traveling in a straight line.

For any given rotational velocity, the amount of “ﬁght” will be directly proportional to the product of ﬂuid velocity and ﬂuid mass. In other words, the magnitude of the Coriolis force will be in direct proportion to the ﬂuid’s mass ﬂow rate. This is the basis of a Coriolis mass ﬂowmeter.

A demonstration of this Coriolis force may be made by modifying the nozzles on a rotary lawn sprinkler so they point straight out from the center rather than angle in one direction. As water squirts through the now-straight nozzles, they no longer generate a rotational reaction force to spin the nozzle assembly, and so the nozzles remain in place (this much should be obvious).

This is a very non-intuitive concept, so it deserves further explanation. The “anti-rotating” sprinkler doesn’t just fail to rotate on its own – it actually opposes any attempt to rotate from an external force (e.g. a person trying to push the tubes by hand).

Having liquid water move through the tubes is what makes the diﬀerence, and the reason becomes clear once we imagine what each water molecule experiences as it ﬂows from the center (axis of rotation) to the nozzle at the tube tip.

Each water molecule originating from the center begins with no lateral velocity, but must accelerate as it travels farther along the tube toward the circumference of the tips’ rotation where the lateral velocity is at a maximum.

However, with water ﬂowing from center to tip, this process of acceleration from zero velocity to tip velocity must occur over and over again (continually) for each new water molecule ﬂowing through. This continual acceleration of new mass is what generates the Coriolis force, and what actively opposes any external force trying to rotate the “anti-rotating” sprinkler.

As you might guess, it can be diﬃcult to engineer a tubing system capable of spinning in circles while carrying a ﬂow stream of pressurized ﬂuid. To bypass the practical diﬃculties of building a spinning tube system, Coriolis ﬂow meters are instead built on the principle of a ﬂexible tube that oscillates back and forth, producing the same eﬀect in a cyclic rather than continuous fashion. The eﬀect is not unlike shaking a hose (Note) side to side as it carries a stream of water:

Note : The Coriolis force generated by a ﬂowing ﬁre hose as ﬁreﬁghters work to point it in a diﬀerent direction can be quite signiﬁcant, owing to the high mass ﬂow rate of the water as it ﬂows through the hose and out the nozzle! 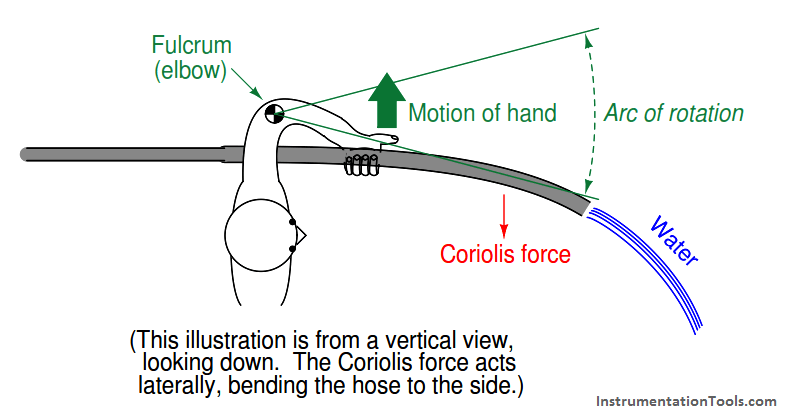 If we had a way to precisely measure the Coriolis force imparted to the hose by the water stream, and to precisely wave the hose so its rotational velocity held constant for every wave, we could directly infer the water’s mass ﬂow rate.

What is Coriolis Flow Meter ?

X
Ultrasonic Flow meters AnimationAnimationAn ultrasonic flow meter is a meter that measures the flow by detecting the action of fluid flow on an ultrasonic beam (or ultrasonic pulse). Features…
Send this to a friend