Split-range control is used when a single controller is employed to control two final-control elements (two valves for example).

In such a system, the controller struggle to keep one controlled variable at the set point using two manipulated variables.

The concept of split-range control is easier to understand when illustrated using applications such as a temperature control.

In such an application, the process needs to be heated or cooled depending of the product temperature.

The below figure shows how the temperature transmitter, the controller, and the two control valves are connected for split-range control in a typical temperature control application. At 50%, the heating valve starts to open and it is fully open at 100% of the controller output.

In a split-range control installation, there are different ways to connect the valves so that they operate on two different ranges.

In the example above, the current to pressure converters are used to split the controller output in two ranges.

The first converter responds to a current from 4 mA to 12 mA, while the other operates in a range from 12 mA to 20 mA.

When using this type of wiring, no special controller or configuration is required for split-range control.

The below figure shows a setup that performs the same split-range control but, in this case, the signal from controller is a pneumatic signal. In such a setup, the two valves are mechanically different.

The spring/diaphragm actuators of the two valves are selected so that their ranges of operation are different. 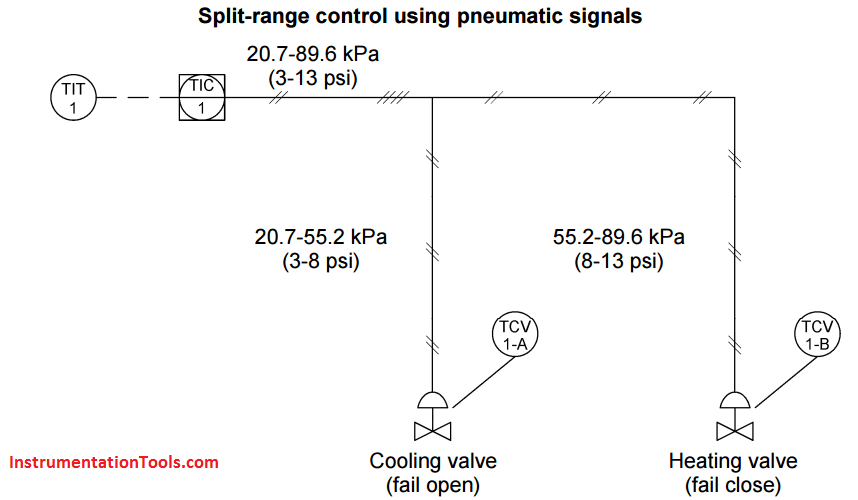 The opening and closing of the valves follow the same rules for both of the setups shown above.

The graph shows the relationship between the opening of the valves and the controller output. One problem that may arise with the setups detailed above is that the system may switch continuously between cooling and heating when the controller output is around 50%. The below figure shows another example of split-range control. In this example, chemical reactants come into a reactor via a first control valve that limits the input flow.

Another control valve limits the output flow of the reactor. To ensure a high-efficiency chemical reaction and a uniform product, the pressure inside the reactor must be kept above a given level. Split-range control for a flare application

Gas flares are common in refinery and chemical plants. These devices are mainly used to burn the excess of flammable gas in a vessel and prevent an eventual explosion of due to over-pressure. When something goes wrong, the flare system is the insurance against disaster.

Many flare systems rely on split-range control for the evacuation of the gas.

The below figure shows a typical split-range arrangement for a flare application. In a flare application, a fluid or a gas is processed in a vessel. The chemical reaction or the physical condition to which the fluid is exposed allows obtaining the desired product plus an (undesired) excess of flammable gas.

In the example above, it is a pressure transmitter that determines if the product is ready and if there is a gas excess.

As the pressure increases, the control valve allowing the product to exit the vessel and go to the gas compressor opens. This valve continues to open until the controller output reaches 50%.

At this point, the valve is fully open while the flare valve is still closed. If the pressure still increases, it indicates to the controller that there is an excess of gas that must be evacuated.

Thus, the controller increases its output and the flare valve starts to open to evacuate the gas and burn it. When the controller output reaches 100% both valves are fully open. Why Bias used in Proportional Controller ?