The IEC also defines how manufacturers should mark the values of resistors and capacitors in the standard called IEC 60062. The colours used on fixed leaded resistors are shown below: The  resistance  colour  code  consists  of  three  or  four  colour  bands  and  is followed by a band representing the tolerance. The temperature coefficient band, if provided, is to the right of the tolerance band and is usually a wide band positioned on the end cap.

Whether two or three significant figures are represented depends on the tolerance: ±5% and wider require two band; ±2% and tighter requires three bands. The significant figures refer to the first two or three digits of the resistance value of the standard series of values in a decade, in accordance with IEC 60063 as indicated in the relevant data sheets and shown in Below Table.

The colours used and their basic numerical meanings are recognized internationally for any colour coding used in electronics, not just resistors, but some capacitors, diodes, cabling and other items. 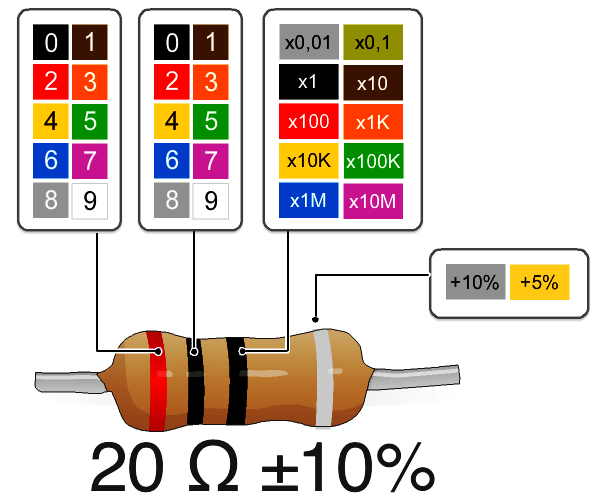 When resistors are labelled in diagrams, such as schematics, IEC 60062 calls for  the  significant  figures  to  be  printed  as  such,  but  the  decimal  point  is replaced with the SI prefix of the multiplier. Examples of such labelling are shown below: A portion of a schematic diagram showing designators and IEC labelling is shown below: