What are Series and Parallel Circuits? Circuits consisting of just one battery and one load resistance are very simple to analyze, but they are not often found in practical applications. Usually, we find circuits where more than two components are connected together.

There are two basic ways in which to connect more than two circuit components:

First, an example of a series circuit: 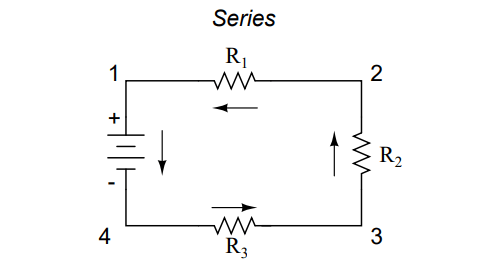 Here, we have three resistors (labeled R1, R2, and R3), connected in a long chain from one terminal of the battery to the other. (It should be noted that the subscript labeling – those little numbers to the lower-right of the letter ”R” – are unrelated to the resistor values in ohms. They serve only to identify one resistor from another.)

The defining characteristic of a series circuit is that there is only one path for electrons to flow. In this circuit the electrons flow in a counter-clockwise direction, from point 4 to point 3 to point 2 to point 1 and back around to 4.

Now, let’s look at the other type of circuit, a parallel configuration: 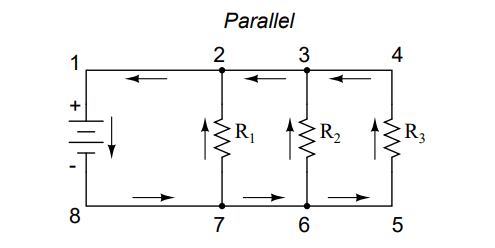 The defining characteristic of a parallel circuit is that all components are connected between the same set of electrically common points. Looking at the schematic diagram, we see that points 1, 2, 3, and 4 are all electrically common. So are points 8, 7, 6, and 5. Note that all resistors as well as the battery are connected between these two sets of points.A

And, of course, the complexity doesn’t stop at simple series and parallel either!

We can have circuits that are a combination of series and parallel, too: 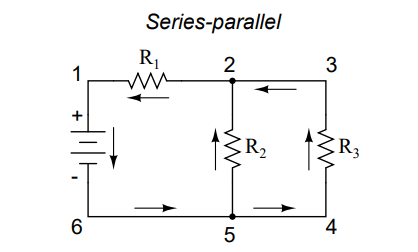 Notice how both current paths go through R1 (from point 2 to point 1). In this configuration, we’d say that R2 and R3 are in parallel with each other, while R1 is in series with the parallel combination of R2 and R3.

This is just a preview of things to come. Don’t worry! We’ll explore all these circuit configurations in detail, one at a time!

The basic idea of a ”series” connection is that components are connected end-to-end in a line to form a single path for electrons to flow:

Series and parallel resistor configurations have very different electrical properties. We’ll explore the properties of each configuration in the sections to come.

What are Series and Parallel Circuits?