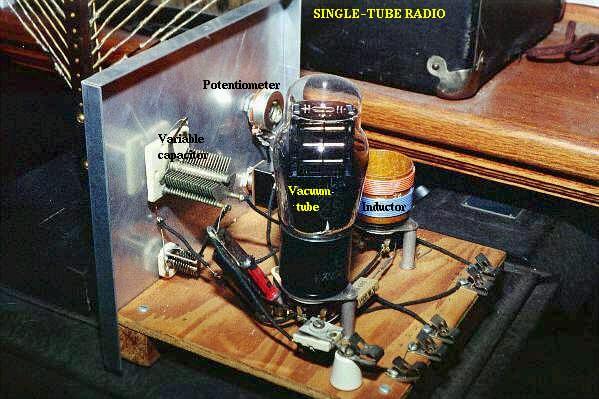 Edison\’s successful design of 1879 was actually preceded by 77 years by the British scientist Sir Humphry Davy, who first demonstrated the principle of using electric current to heat a thin strip of metal (called a “filament”) to the point of incandescence (glowing white hot).

Edison was able to achieve his success by placing his filament (made of carbonized sewing thread) inside of a clear glass bulb from which the air had been forcibly removed. In this vacuum, the filament could glow at white-hot temperatures without being consumed by combustion: 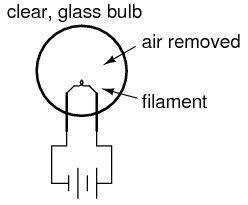 In the course of his experimentation (sometime around 1883), Edison placed a strip of metal inside of an evacuated (vacuum) glass bulb along with the filament.

Between this metal strip and one of the filament connections he attached a sensitive ammeter. What he found was that electrons would flow through the meter whenever the filament was hot, but ceased when the filament cooled down: 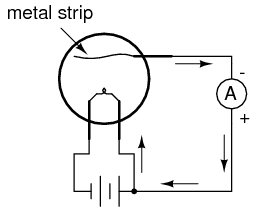 The white-hot filament in Edison\’s lamp was liberating free electrons into the vacuum of the lamp, those electrons finding their way to the metal strip, through the galvanometer, and back to the filament.

His curiosity piqued, Edison then connected a fairly high-voltage battery in the galvanometer circuit to aid the small current: 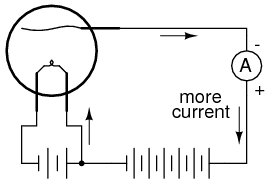 Sure enough, the presence of the battery created a much larger current from the filament to the metal strip. However, when the battery was turned around, there was little to no current at all! 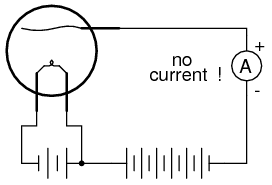 In effect, what Edison had stumbled upon was a diode! Unfortunately, he saw no practical use for such a device and proceeded with further refinements in his lamp design.

The one-way electron flow of this device (known as the Edison Effect) remained a curiosity until J. A. Fleming experimented with its use in 1895. Fleming marketed his device as a “valve,” initiating a whole new area of study in electric circuits.

Vacuum tube diodes — Fleming\’s “valves” being no exception — are not able to handle large amounts of current, and so Fleming\’s invention was impractical for any application in AC power, only for small electric signals.

Then in 1906, another inventor by the name of Lee De Forest started playing around with the “Edison Effect,” seeing what more could be gained from the phenomenon.

In doing so, he made a startling discovery: by placing a metal screen between the glowing filament and the metal strip (which by now had taken the form of a plate for greater surface area), the stream of electrons flowing from filament to plate could be regulated by the application of a small voltage between the metal screen and the filament: De Forest called this metal screen between filament and plate a grid. It wasn\’t just the amount of voltage between grid and filament that controlled current from filament to plate, it was the polarity as well.

Perhaps most importantly was his discovery that the small amounts of grid voltage and grid current were having large effects on the amount of plate voltage (with respect to the filament) and plate current.

In adding the grid to Fleming\’s “valve,” De Forest had made the valve adjustable: it now functioned as an amplifying device, whereby a small electrical signal could take control over a larger electrical quantity.

The closest semiconductor equivalent to the Audion tube, and to all of its more modern tube equivalents, is an n-channel D-type MOSFET. It is a voltage-controlled device with a large current gain.

Calling his invention the “Audion,” he vigorously applied it to the development of communications technology. In 1912 he sold the rights to his Audion tube as a telephone signal amplifier to the American Telephone and Telegraph Company (AT and T), which made long-distance telephone communication practical.

In the following year he demonstrated the use of an Audion tube for generating radio-frequency AC signals. In 1915 he achieved the remarkable feat of broadcasting voice signals via radio from Arlington, Virginia to Paris, and in 1916 inaugurated the first radio news broadcast. Such accomplishments earned De Forest the title “Father of Radio” in America.