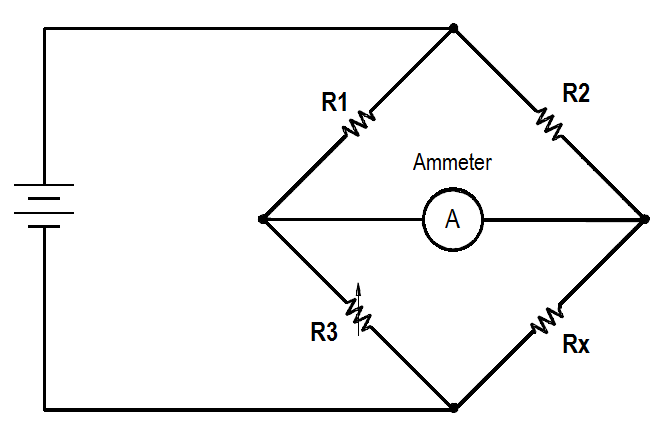 Since the values of R1, R2, and R3 are known values, the only unkown is Rx. The value of Rx can be calulated for the bridge during an ammeter zero current condition. Knowing this resistance value provides a baseline point for calibration of the instrument attached to the bridge circuit. The unknown resistance, Rx, is given by below Equation 2.

When balance exists, R3 will be equal to the unknown resistance, even if the voltage source is unstable or is not accurately known. A typical Wheatstone bridge has several dials used to vary the resistance. Once the bridge is balanced, the dials can be read to find the value of R3. Bridge circuits can be used to measure resistance to tenths or even hundredths of a percent accuracy. When used to measure temperature, some Wheatstone bridges with precision resistors are accurate to about + 0.1°F. The battery is connected to two opposite points of the bridge circuit. The millivoltmeter is connected to the two remaining points. The rheostat regulates bridge current. The regulated current is divided between the branch with the fixed resistor and range resistor R1, and the branch with the RTD and range resistor R2. As the electrical resistance of the RTD changes, the voltage at points X and Y changes. The millivoltmeter detects the change in voltage caused by unequal division of current in the two branches. The meter can be calibrated in units of temperature because the only changing resistance value is that of the RTD. 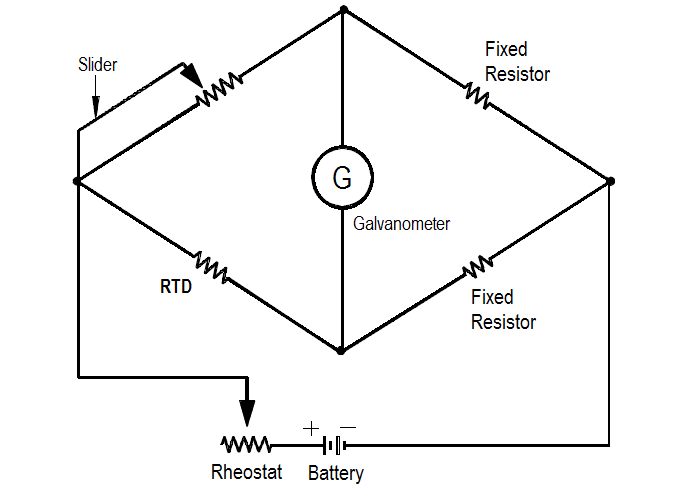 Because of changes in ambient temperature, the resistance thermometer circuitry must be compensated. The resistors that are used in the measuring circuitry are selected so that their resistance will remain constant over the range of temperature expected. Temperature compensation is also accomplished through the design of the electronic circuitry to compensate for ambient changes in the equipment cabinet. It is also possible for the resistance of the detector leads to change due to a change in ambient temperature. To compensate for this change, three and four wire RTD circuits are used. In this way, the same amount of lead wire is used in both branches of the bridge circuit, and the change in resistance will be felt on both branches, negating the effects of the change in temperature.

The basic bridge circuit consists of:

The bridge circuit is considered balanced when the sensing ammeter reads zero current.

A basic temperature instrument is comprised of: